Communities collaborating to improve the lives of New Kiwis

World Refugee Day 2020 on June 20th marked another significant opportunity for the global community to reflect on the continuing plight of refugees around the world.

Raising awareness and stimulating discourse are undoubtedly important steps in improving the situation for refugees. But in 2019, we had the opportunity to be a part of an initiative that took a step further - kicking off an ongoing project of co-design to incubate real action towards addressing critical resettlement challenges in New Zealand.

It all started when Martine Udahemuka, a former refugee, reached out to ThinkPlace with an idea to start a new permanent feature of World Refugee Day in New Zealand. Martine’s vision was of a forum that would bring together former refugees, New Kiwis, with the New Zealand host community, to collaborate on innovative ideas to address the challenges facing New Kiwis today.

Martine’s drive for holding this workshop was sparked by her own experience. Having survived the war in Rwanda and making the journey to NZ with her family 24 years ago, she believed that her family’s survival journey had to be for something. Martine wanted to use the second chance she had been given to make a difference to the lives of others and saw an opportunity for change in bringing together the New Kiwis and NZ host communities through co-design.

So we worked with Martine pro-bono to develop and execute a community co-design workshop that would achieve this vision.

In order to effect the real change that Martine envisioned, the platform needed to be community-led, and the workshops needed to push participants past rhetorics and into collaborative action. Our challenge was set. As Martine identified, successfully stimulating real collaboration and action would rely on two things: genuine and motivated attendees, and great facilitation.

The inaugural annual “Learn and Innovate with New Kiwis” (LINK) hui was held across 20th and 21st of June 2019.

The workshop was co-designed and facilitated by ThinkPlace NZ’s Jim Scully, D’Arcy Dalzell, Jack Huston, Morgan Scully, and myself, with invaluable facilitation support from Hiranthi Abeygoonesekera and Malvika Raghav.

We kicked off on the 20th with an evening of inspiring talks from New Kiwis, sharing in food also made by members of the New Kiwi community. The evening was a beautiful opportunity to build empathy and understanding amongst the participants about the lives and experiences of NZ’s former refugees. Tales from former refugee business owners about the struggles and successes of setting up shop here in Aotearoa gave workshop participants an impactful glimpse into the realities of paving your own way in a new homeland.

The next day we heard from members of the New Zealand host community who were some of the biggest employers of former refugees. They talked about how to be the best allies and provide support for New Kiwis in the workplace.

Hearing this range of real stories worked incredibly to set the scene of the workshop. Participants entered the co-design process more of a grounded understanding of the realities of being resettled in Aotearoa.

After these talks on the second day, we dove in to a day-long co-design process. The hui was focused on exploring two main themes pertinent to the life of New Kiwis: securing meaningful employment and business opportunities; and enhancing social cohesion and connections in Aotearoa. Working in small groups, participants took on a full-spectrum co-design process. Starting by building empathy and sharing insights, the teams then collaboratively developed amazingly innovative prototypes of ideas that addressed the challenges discussed. At the end of the day, the most promising final idea was selected by a panel of judges, and given a commitment to on-going support to get it off the ground.

The workshop saw a fantastic turnout with a mix of participants from all walks of life. About 35 to 40 people from the community attended to share their stories and ideas with us. There were teenagers and retirees, and accountants, medical professionals, graphic designers, business owners, public servants, media professionals, computer scientists, entrepreneurs, students and many more. Everyone brought their most open minds and collaborative spirits, and the ideas generated were truly innovative and inspiring.

The Loop, the project that won the judges’ hearts in 2019, is an exciting initiative using social media to shift the narratives around New Kiwis from one of challenges to one of opportunities. The project has been progressing well, with the young women in the project curating inspiring stories of success about former refugees doing good in New Zealand. The project team will begin profiling these stories this year.

Another project idea that was presented at the workshop has also continued to progress, being developed by a mix of workshop participants and other parties. The idea is the “One Place for All” platform; a online multi-lingual platform providing useful information vital to successful resettlement for all new and established former refugees. The platform will also work as a tool for anyone looking to support New Kiwis in their new lives.

Another awesome and pleasantly surprising outcome of the hui has been the connections that workshop participants made amongst themselves. One group of participants got to talking and realised that they had a common interest in the idea of creating a media platform to amplify the voice of the former refugee community. They met after the hui and collaborated to launch the successful “Voice of Aroha” initiative, which is run by the New Kiwis community with support from the NZ host community.

As Martine says, “a year on, and participants still talk about the day and are excited about the next event.” And there will be one - although due to COVID-19, it’s been postponed to later in 2020.

Thanks to Jim Scully for starting this story off, and to Martine Udahemuka for her update and her blessing to share this story with you all! 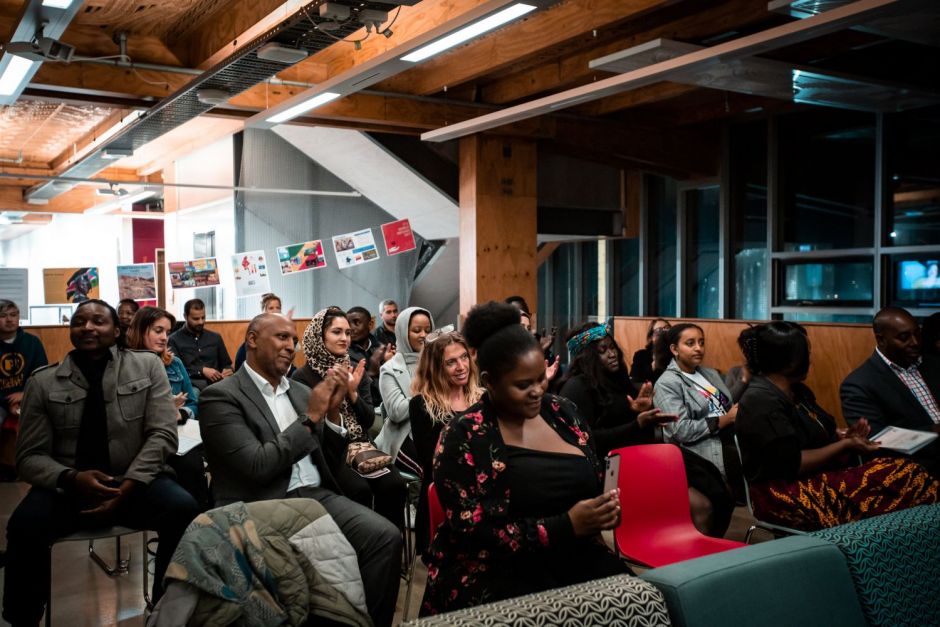